This Sunday, riders on horseback, decked out in their jingle bell best, will ring in the holiday season as they ride through North Salem for the annual Jingle Bell Jog, an annual tradition for the town’s equestrian community.

Now in its 15th year, the North Salem Bridle Trails Association (NSBTA) will be the host of this ever-popular event.

All North Salem equestrian disciplines are welcome to come together at 11a.m. Sunday to form a parade, riding through town singing Christmas carols and spreading cheer. Anyone can participate; the only requirement is the horse must be wearing bells.

“That could mean a big string of bells around their necks or just a tiny little bell attached to the saddle – any bell goes!” said Charlotte Harris, co-president of the NSBTA. “It's just a fun, festive ride to get people in the spirit of the holiday season.”

This year’s event kicks off at Julia Burke's Ogilvie Farm on Vail Lane. Burke, a rider and NSBTA member, will host a costume contest in her horse ring. After the contest, the riders will start off down Vail Lane to Route 121 where they will receive a police escort to ensure the safety of the horses and riders. They’ll end up at Hayfields Café and Florist, where they will gather to sing more Christmas carols and invite spectators to join in. Afterward, they ride up Dingle Ridge Road to Finch Road and back to Ogilvie Farm.

“Everyone is invited to come watch and see the horses off. There’s plenty of room to park and take photos,” Harris noted.

Harris notes cars are basically stuck behind the horses if they’re going north on Route 121, and cars going south slow way down. “The riders will be singing carols along the way and the sound of all the bells is just amazing. People wave, take pictures. and smile,” Harrs said.

From an idea to a tradition

This year represents a big change for the Jingle Bell Jog.

Since it was established, the event was held at Windward Mark Farm, owned by North Salem residents Yolanda and Richard Knowlton, who will be stepping away. The Jog will have its first year at Ogilvie Farm.

“It’s the passing of the torch. The Knowltons have hosted this wonderful, festive event for 14 years. Their spirit and generosity is unparalleled,” said Harris. “What was once a cozy neighborhood party turned into a huge event that opened its doors to NSBTA members. We’ll be forever thankful to them for including our membership in their holiday kick-off.”

The Knowltons have owned Windward Mark Farm since 2001. “I’ve been a member of Golden's Bridge Hounds (GBH) since 1996 and was appointed and served as a Master of GBH from 2011 until 2020. I was a board member of the NSBTA from 2009 until last year,” explained Yolanda.

Knowlton appreciated the camaraderie among the hunt and its members. “GBH was a very social group but rarely did we interact with other equestrians within the community -- Western riders, trail riders, ‘show’ riders,” she said. “I remember sitting at the kitchen table in November of 2007 and saying to Richard, ‘it's too bad we never really mingle with any other riders outside of the hunt’ and he said, ‘why don't we do something about it?’ ” That’s how the Jog was born.

The first year there were only 20 participants, and it grew to more than 67 riders for the last one held right before the pandemic. “I ran it with fast and slow groups galloping around the trails and then coming back to our place for some modest holiday cheer. Folks loved it and wanted to know how to participate,” she explained. The next year, ribbons were distributed to participants. By the third year, Knowlton had added a costume contest, horn-blowing contest, and whip cracking contest, and awarded prizes to the best decorated horse and rider. Since then, the jog was modified to stay on the walking trails and to include caroling.

The Knowltons are happy to put JBJ into the hands of the NSBTA. “We felt that it had grown into such a beloved holiday tradition that it really was time for it to evolve from a privately hosted event to something that was really more appropriate for the NSBTA as an organization to host,” she said, proud of how it has grown.

“I think the growth can be attributed to our love of horses and the North Salem community as a whole. It was a perfect way to bring together all of the various equestrian disciplines for one festive afternoon,” Yolanda said. “We will be there in spirit though. . . jingling all the way!”

She hopes the event continues to grow. “We hope it will become even bigger and better in the future. Hard to believe that an idea that came to life over our kitchen table so many years ago has grown and flourished to what it is now,” she added. “We are proud to have started it.”

If you have any questions or would like to learn more about the Jingle Bell Jog, email info@nsbta.org. If you’re planning on attending, organizers request that you park on Vail Lane or Finch Road as space is limited at Ogilvie. 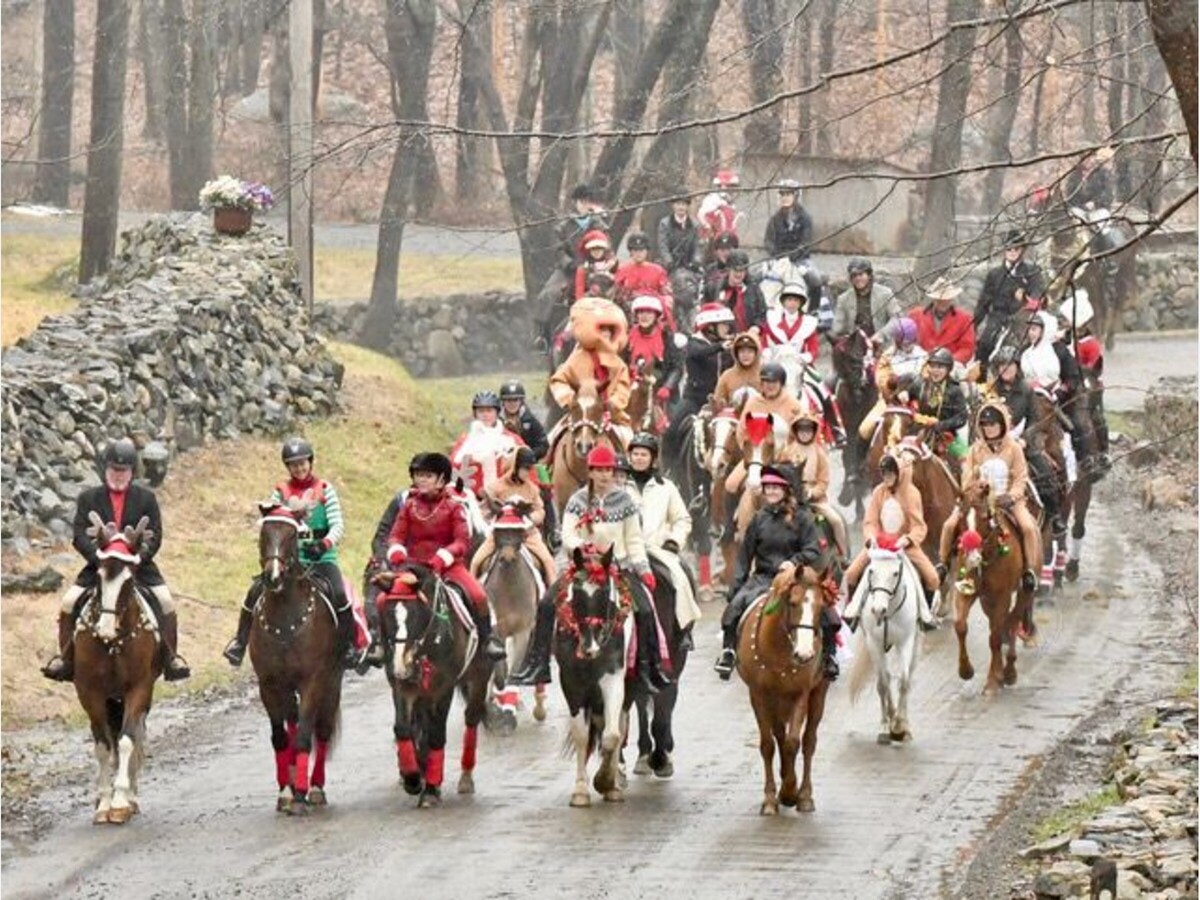 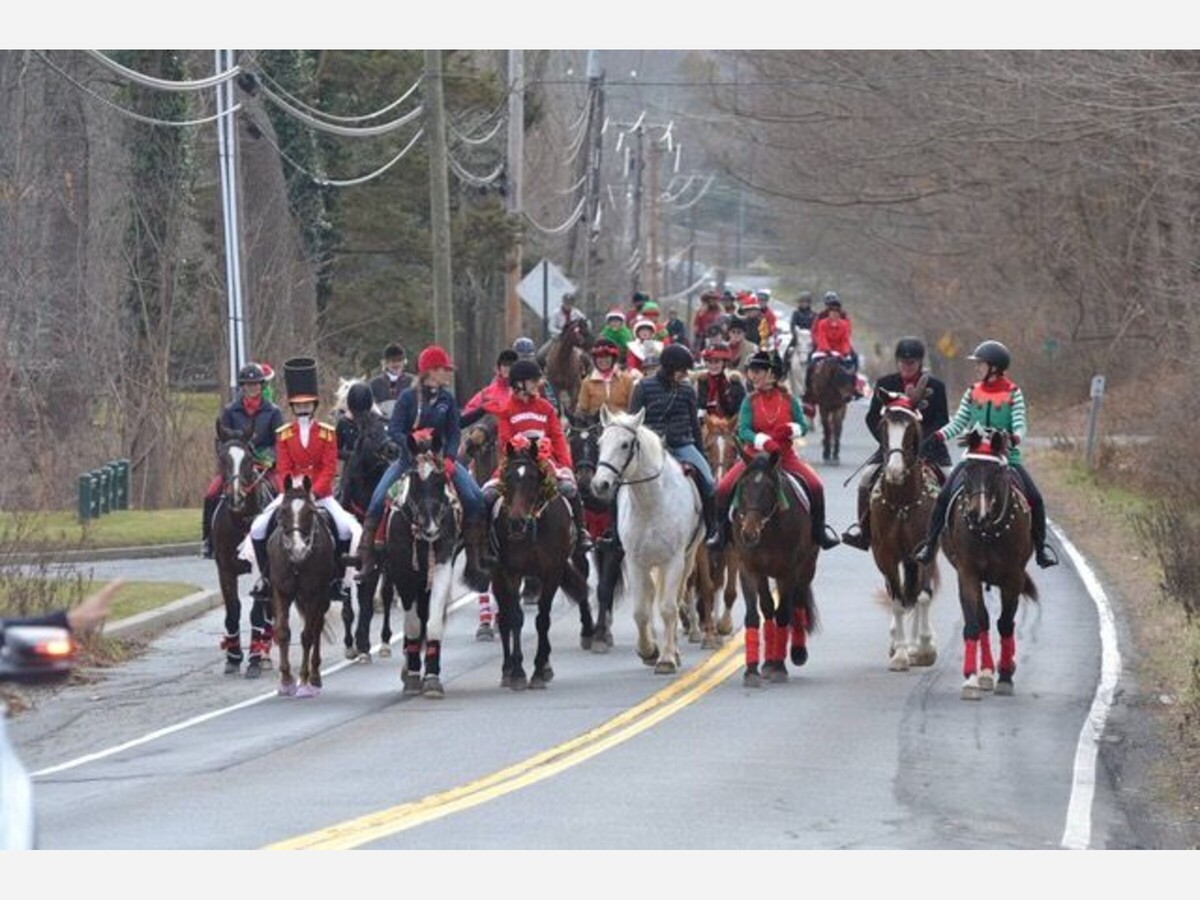 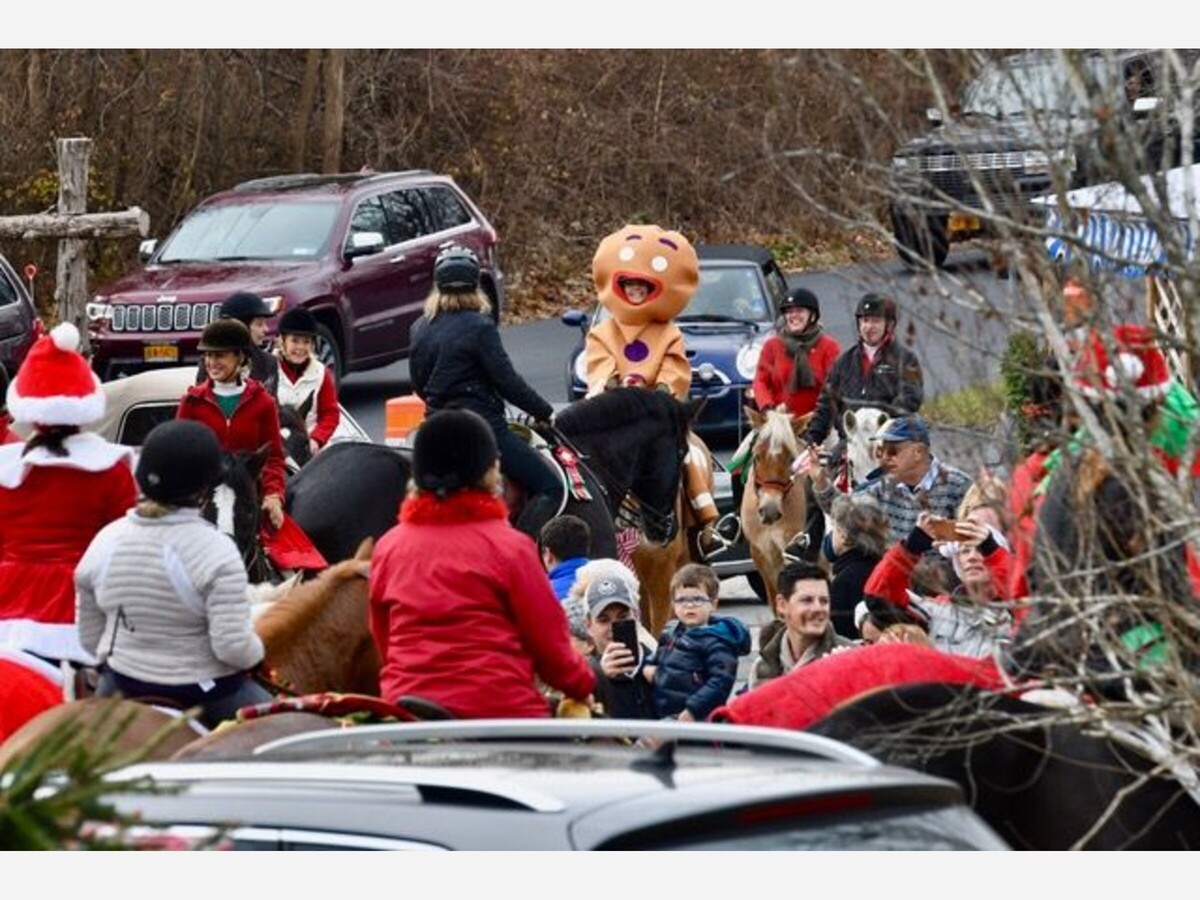 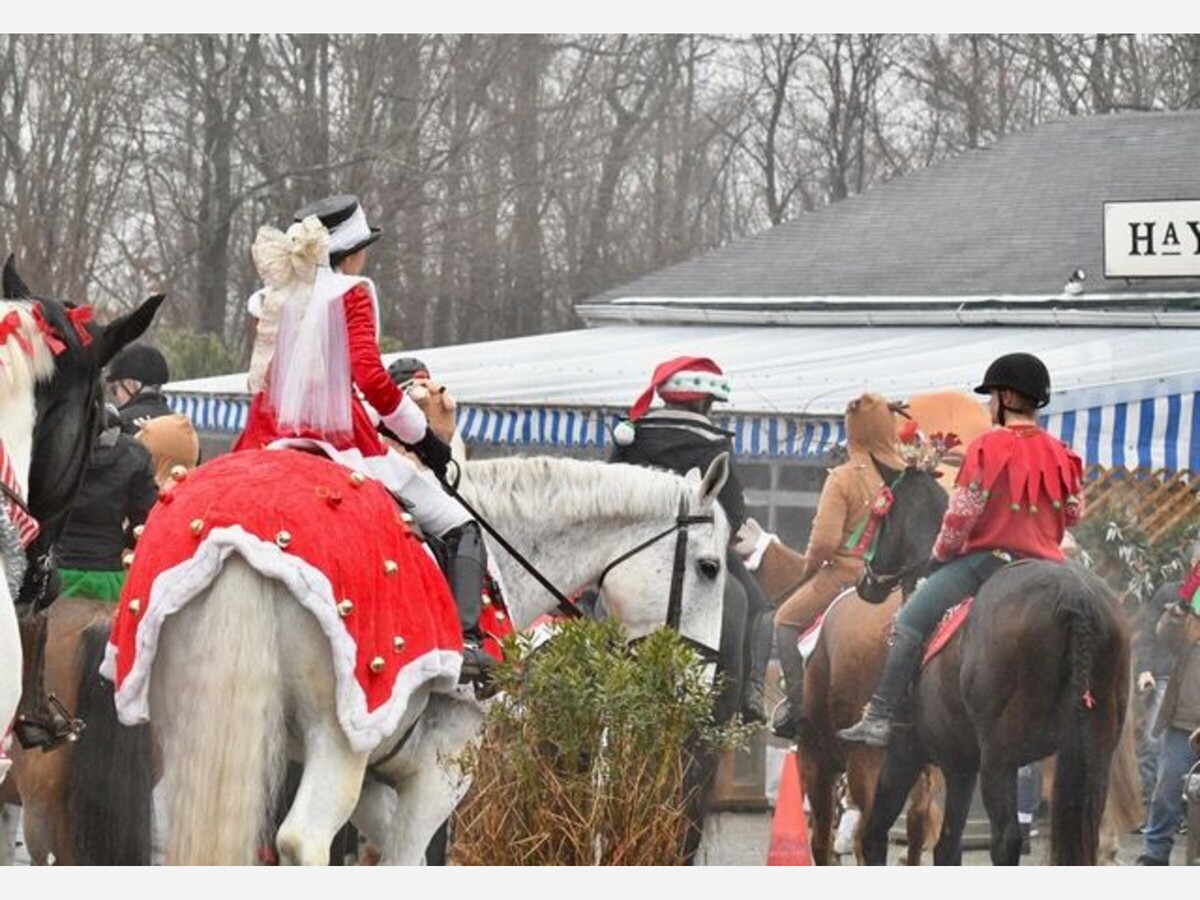 1
I'm interested
You must log in to thank, flag, or reply
I disagree with this
This is unverified
Spam
Offensive

Inside This & That Vintage, a Cross River boutique from visual storyteller Nicole Mata

Christine Carpenter Contributor
You must log in to thank, flag, or reply
I disagree with this
This is unverified
Spam
Offensive
North Salem Thu. Feb 2 2023

The engineering technology classes at North Salem Middle/High School empowers students to find their own solutions to a multitude of engineering challenges.
Sarah Divi Contributor

Sarah Divi Contributor
You must log in to thank, flag, or reply
I disagree with this
This is unverified
Spam
Offensive
North Salem Weather

Sarah Gayden Editor
You must log in to thank, flag, or reply
I disagree with this
This is unverified
Spam
Offensive
North Salem Thu. Feb 2 2023

Take your Child to the Library Day

Pamela Brown Contributor
You must log in to thank, flag, or reply
I disagree with this
This is unverified
Spam
Offensive
North Salem Tue. Jan 31 2023

Nova is looking for his forever home.
Sarah Gayden Editor

Sarah Gayden Editor
You must log in to thank, flag, or reply
I disagree with this
This is unverified
Spam
Offensive
North Salem Mon. Jan 30 2023

Leaders say the state is out of bounds to mandate increased housing in local municipalities.
Sarah Gayden Editor

Sarah Gayden Editor
You must log in to thank, flag, or reply
I disagree with this
This is unverified
Spam
Offensive
North Salem Fri. Jan 27 2023

Check out these 10 events coming up this weekend on our calendar.
Sarah Gayden Editor

Sarah Gayden Editor
You must log in to thank, flag, or reply
I disagree with this
This is unverified
Spam
Offensive
North Salem Thu. Jan 26 2023

Town organizations to host classes/workshops for youth and adults

Get to know the next superintendent of North Salem schools.
Sarah Gayden Editor

Sarah Gayden Editor
You must log in to thank, flag, or reply
I disagree with this
This is unverified
Spam
Offensive
The North Salem Post Event Calendar
Featured Events

SPONSOR
Get your business noticed in North SalemAdvertise